HELLO, My Name Is: Interview with Scott Ginsberg, The Nametag Guy 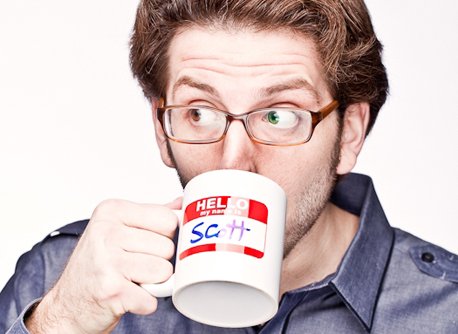 What happens when you wear a nametag twenty-four hours a day, seven days a week?

Scott Ginsberg has done just that for the last 4,305 days – over twelve years.  What started as a social experiment has evolved into an urban legend, world record, cultural phenomenon – even a profitable enterprise. If you Google the word nametag, and you’ll see his work benchmarked as a case study on human interaction, revolutionizing the way people look at approachability, identity and commitment.

As a writer, Scott’s authored twenty-five books, produced his own online show on NametagTV.com and reached millions of readers on his an award- winning blog.

As a performer, his one-man show has made over six hundred corporate appearances in five countries.

He has been featured in hundreds of outlets such as 20/20, CNN, USA Today, The Wall Street Journal, Inc. Magazine, The Associated Press, REDBOOK, FastCompany, The Washington Post, Paul Harvey, The CBS Early Show and Headline News, and Scott was even inducted into the hall of fame of Ripley’s Believe It Or Not.

And best of all, we went to high school together.

Find out more when we talk about:

Use Up/Down Arrow keys to increase or decrease volume.

(According to Scott’s instructions):

No comments to show.